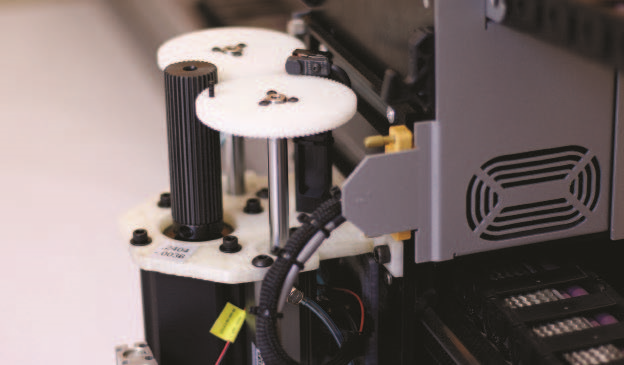 MarkForged Cutting Both Textiles and Costs in Industry

With the desire to push new designs forward faster, Jonathan Palmer, CTO, needed an inexpensive prototyping tool whose parts could match the strength of machined aluminum

The Mark Two reduced prototyping time from weeks to days, and reduced the weight of a prototype cutting head by half a pound

From canvas and ripstop nylon all the way to carbon fiber and tarp, Autometrix Precision Cutting Solutions designs and manufactures cutting equipment for textiles in nearly every industry. “We started with sailmakers…sailmakers don’t typically cut patterns by hand anymore, and most of them use an Autometrix machine. We’ve spread in that respect all over the world,” says Electrical Engineer Tyler Green, who tests some of the machines at Autometrix. Since then, Autometrix has provided cutting equipment and patterning software to a variety of industrial applications, used for anything from transportation to medical devices.

In the cutting industry, Autometrix strives for their machines to be fast, precise, and efficient. As Chief Technical Officer, Jonathan Palmer manages new product development, especially in the hardware and mechanical systems. “The equipment we build is almost always made out of machined aluminum parts. The problem that we run into as we’ve tried to increase how quickly we can prototype things is that a one-off machined aluminum part is very expensive,” Palmer explained. “We were working to bring more control over our own prototyping process, but we needed to make sure that the results of that prototyping process were real to what we were trying to design.” They needed an inexpensive method to produce prototypes that could match the strength of a machined component.

When Palmer considered bringing 3D printers into Autometrix, he initially dismissed the idea: “The main thing standing between Autometrix and 3D printing has always been the strength of the part: Is it going to be a part that we can really test in a real world environment?” If they were to use affordable desktop 3D printers only able to print in thermoplastics and resins for their prototypes, their parts would be too weak to use as functional prototypes. “You can’t compare a standard printed plastic part with the behavior, the performance you would get out of a machined aluminum part,” Palmer explained when describing his thoughts on the matter. “So if you build a prototype in our world out of plastic parts, you really can’t test that under a real world case.” Palmer recognized the need for an efficient CNC prototyping tool like a 3D printer, but desktop 3D printers didn’t produce parts with the strength they needed, and metal 3D printers and other industrial CNC machines were far too expensive to even consider purchasing. That’s when they found out about the Mark Two.

“As soon as we were able to see a printer that could create a part out of plastic with reinforcement that gave us something we could really work with, that really caught our attention,” Palmer described. The Mark Two met all of the qualifications they needed in a printer: with its low price, its high precision, and its part strength comparable to metal, Autometrix could easily test new ideas and prototypes without having to pay third party manufacturers for expensive, single parts and long lead times. “We ended up looking through dozens of different 3D printers…” Green explained. “What we found was Markforged was able to produce stronger parts in a shorter amount of time for way less money than anything else we had found out there.” They needed to ensure it would improve their process, and after a few test samples, they were confident that it could: “Markforged was very helpful in allowing us to prove that process out, and show ourselves that we could use a 3D printer to increase how quickly we could prototype things,” Palmer mentioned when describing the process of selecting and testing the printer. “As we’ve gone through the learning process, running into any issues, Markforged has been great with their support.“

“We’re really excited to use the printer going forward. One of our first big projects…we actually printed out an entire cutting head on the Mark Two. And after building it up, calibrating it, testing it, we put it on a scale and found out that just the cutting head alone is about half a pound lighter than its aluminum counterpart,” Green described. “For us weight savings on any part is especially desirable because all of our cutting happens on a moving carriage…a half a pound lost on any part means less wear and tear on the machine…it gives us more capability going down the road.” The lightweight parts made on the Mark Two hold up to all the abuse their metal counterparts do and more, allowing Green and other engineers at Autometrix to improve and expand their mechanical systems.

“When you know you have a printer sitting on a desk in your engineering hallway, it really changes our ability to try new iterations of things, to say ‘that sounds like a reasonable idea, let’s give it a try,’ and move on to the next step,” Palmer explained. With the Markforged printer, Autometrix no longer needs to send out prototype parts to an external manufacturer, only to wait up to two weeks before getting it back. “We’re constantly cycling through new ideas for our machines… having a 3D printer to take an idea from our computer screen to real life…and then with the Mark Two, actually use it, in the matter of just a day, is stellar,” said Green. The Markforged has allowed Autometrix to vastly reduce development time, and its capabilities help cut textiles, time, and costs much more efficiently.