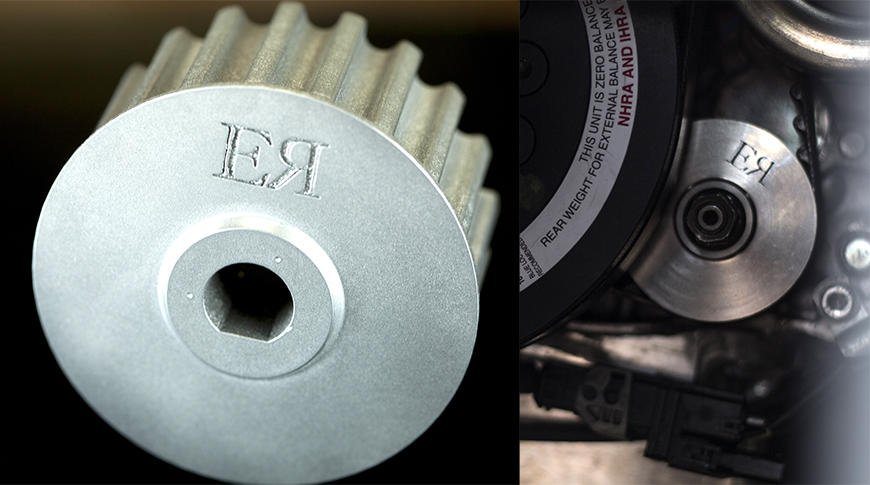 To see a video on this case study, visit: Video: Metal Technology (MTI) forges new path with metal 3D printing and English Racing
Produced unique on-engine 3D printed metal under-pulley gear within 1 day, and was on the race car engine for testing 3 days later to go on and win races 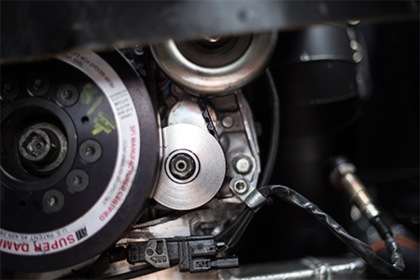 Production of more complex part that would be difficult to produce using traditional methods, taking 1 day to print, saving thousands of dollars in the process compared to casting

English Racing team in Oregon experienced a problem with its Mitsubishi Evo race car that, once tuned, the oil pressure would immediately rise too high and cause engine failure. They had a solution to the problem but creating casted parts was too expensive for the budget. Until they discovered Metal Technologies Inc (MTI) who had an innovative new solution – metal 3D printing.

English Racing had a theory that producing a new under-pulley gear with a larger diameter would turn slower and thereby lower the oil pressure. But producing it was a huge challenge: The original pulley was a cast part, which would typically require a mold, tooling to produce a mold, a significant amount of lead time and a prohibitive amount of money.

Trying unsuccessfully to produce this part for over two years, English Racing saw no relief in sight. So when, in early 2014, the company discovered MTI, they were able to quickly prepare the design data for 3D printing, and produce the part on the ProX DMP 300. The initial working prototype took only five hours to print.

Within 3 days, that part was installed on the Mitsubishi Evo race car and running on track. The part worked perfectly, reducing oil pressure to safe levels and allowing the vehicle to set speed records in its class.

“The ProX DMP 300 allowed us to produce end-use parts faster and more economically than ever before, and these parts are being used in some of the most demanding environments you can imagine,” said Cosmer. “By printing the part we were also able to include features and design parameters that could not be done with traditional methods. In the matrix of component complexity and manufacturing speed and cost, the ProX DMP 300 allows us to bridge that gap for our customers.

After the first part was built and tested, they used the ProX DMP 300 for a production run of 35 additional parts for different race applications across the country.

On June 27th, 2014, the English Racing team put its newly designed oil pump pulley to the test at the Pikes Peak ½ mile top-speed event and achieved 184.9 mile per hour placing first place in the Sedan Class. “The car ran great like we expected it would,” said Zach Morgan, Technician & Tuner for English Racing. “We have been running the car on our dynometer without any failures so we thought we had a car that was going to put us in the winners’ circle, we just didn’t know if that was going to be first place or not. The team is stoked!”

“The ProX DMP 300 was perfect for this job, in total we spent 130 hours on the project that was pretty substantial,” said Cosmer.

The quantity, geometry, and features that would have been difficult to produce any other way—made it an ideal application for DMP on the ProX DMP 300. MTI was able to make short work of a project that had been in the works for years, saving English Racing thousands of dollars and significant time over other manufacturing processes.

“The entire metals industry is on a learning curve in terms of input material, and this is only going to improve,” said Cosmer. “MTI is leading and driving that learning curve and excited to be pushing the envelope in 3D printed metal. We don’t consider this a trivial pursuit.”

Addendum: On July 13, 2014, the Mistubishi Evo with its 3D printed metal underdrive oil pump pulley took first place and record holder as the fastest four-door vehicle with a top speed of 196.6783 MPH.