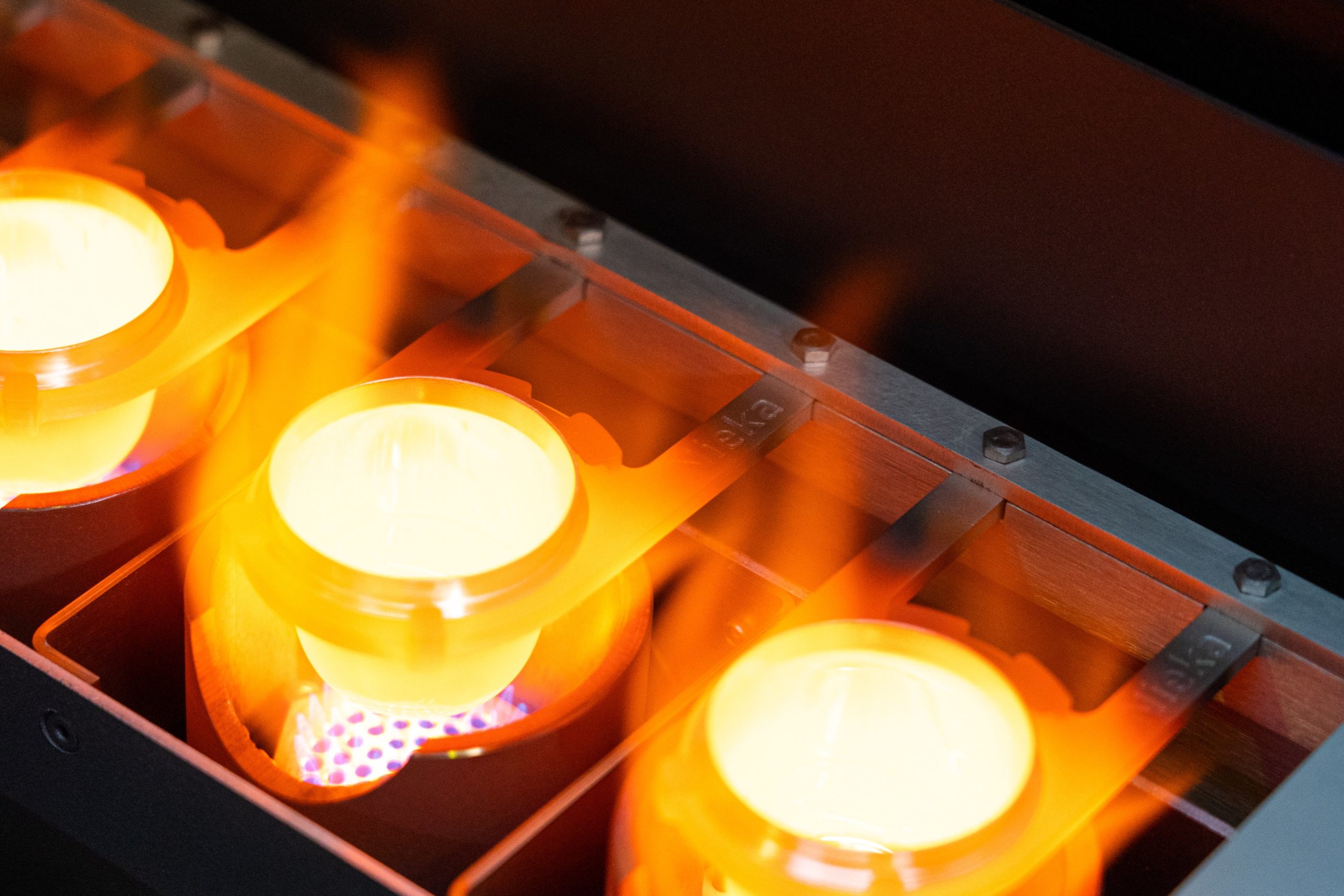 Nieka creates sample preparation equipment that enables their customers in the mining and cement production industries. They needed to find a more viable and affordable solution to get away from the high costs and long lead times of outsourcing metal parts. Given the complexity of machining in Inconel, 3D printing was the ideal solution for their requirements.

Learn more about their application and why they chose to partner with Markforged.

Nieka Systems creates sample preparation equipment that enables their customers in the mining and cement production industries to analyze and ensure quality in their manufacturing processes. Nieka’s machines convert ore or cement samples into glass discs that are later used to make precise compositional analyses of the samples.

The material samples are melted in a platinum crucible, then poured into a heated platinum mold. The melting process occurs at temperatures of up to 1000C, after which the mixture is poured into a mold and is cooled quickly. Because of these repeated, rapid temperature changes, the internal components in Nieka’s fusion instruments need to be made from materials that can tolerate high heats and keep up with rapid temperature cycles.

As Inconel is a nickel-based superalloy that can withstand temperatures of up to roughly 1000C, it was a natural choice for the clips that hold the crucibles and molds in place over gas burners. Nieka Systems initially looked to CNC machining as an option for producing the crucible clips in Inconel, but found the cost to be well beyond their budget and the lead times too long. They then turned to 3D printer service bureaus to outsource 3D printed Inconel 625 crucible clips using Direct Metal Laser Sintering (DMLS) technology. The cost of outsourcing the part’s production using DMLS was at first very attractive, but began to add up, and lead times were highly variable and difficult to forecast. The team grew concerned about whether they would be able to keep up with product demand, having already made their equipment available to 20 countries around the world.

“By adding the Markforged Metal X in-house, there’s virtually no lead time on these parts anymore.”

Following the success of the DMLS Inconel crucible clips — but seeking lower costs and faster, more predictable lead times — Louis Croisetière Ph.D, Founder of Nieka Systems, decided it was time to bring manufacturing in-house. He sought to reduce outsourcing costs and improve lead times, but wanted a solution that would be safe, easy to use, and within his budget. After a thorough look at the 3D printing market, Louis and his team chose the Markforged Metal X system and two composite 3D printers. Nieka Systems selected Markforged for its track record of producing successful 3D printers, emphasizing that “Markforged had a market-ready solution and years of business experience.” Nieka was quickly able to adapt their previous design for the crucible clip and easily print it in Inconel 625 on the Metal X system. The clips have already demonstrated their value after passing Nieka’s internal testing and are now standard in global production units.

Since introducing two types of Markforged high-strength 3D printers to the facility, Croisetière and his team have seen a change in how far they are able to push their product’s design. From composite prototypes to 3D printed Inconel 625 production parts, all of their printers are used across the business. “It’s reduced assembly time for us, and we have none of the design limitations we would have had if we used traditional methods,” said Croisetière. The team can now print the same batch of parts in house 10x cheaper and in four days instead of waiting up to four weeks, and they have saved $108,000 CAD (~$80,000 USD) on part costs alone within a year.

“The Metal X system allows us to make parts faster, reduce lead time, know exactly when we can deliver, go further with the design. And cost-wise, it was very much a no-brainer.”

Nieka Systems has accelerated its product development and minimized its time to market by bringing Markforged technology in-house. Not only has the Metal X expedited the company’s product development, but the team has also utilized its composite printers to fabricate jigs and assembly aids that further accelerate their manufacturing process. While the Metal X system was meant to be dedicated only to high-temperature crucible and mold clips, the team is now using it for other production parts as well. “Some of our new designs are based on the fact that we can print the parts, so I would say it’s kind of changed the way we work,” said Croisetière.