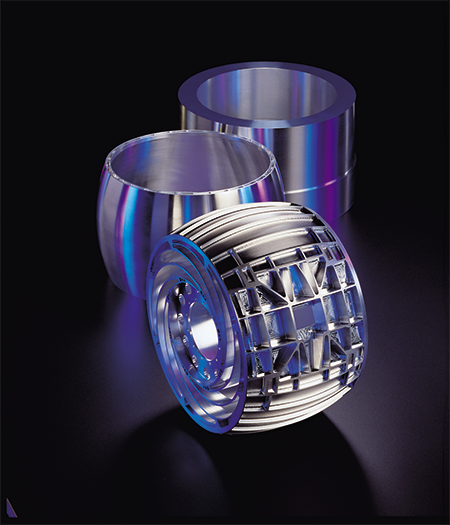 Reaching the Outer Limits with GibbsCAM and the Mars Rover Wheel 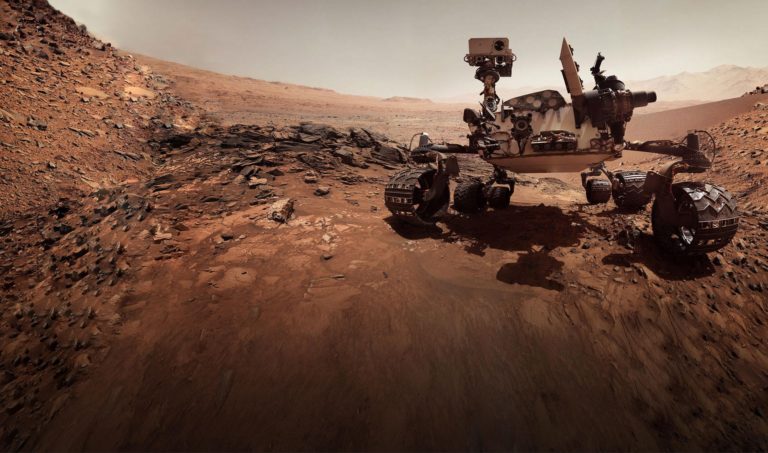 Parts and assemblies for the Rover, some machined from solid titanium, contain complex angles and undercut walls, some with thicknesses as small as 1mm (0.040″).

The successful Mars Rover mission underlines Next Intent’s use of GibbsCAM software to keep material as thin as possible without affecting the structural integrity of parts.

“We’re down!” This shout of joy could be heard from many places on planet Earth as the Mars Rover Spirit touched down on January 4th, 2004. Over the following days, the Rover received instructions from the scientists and engineers on Earth to perform scientific experiments. The Rover also took close-up pictures of the red Martian surface.

The Rover itself is composed of thousands of parts, and the Jet Propulsion Laboratory (JPL) is charged with sourcing the parts and assembly of the Mars Exploration Rovers. JPL itself handles the manufacture of about 20 percent of the parts in-house, while 80 percent of the remaining parts are jobbed out to shops like Next Intent, San Luis Obispo, CA. For Next Intent, working with the Mars Rover project has been an exciting challenge, especially with the success of the recent landing on Mars. “Our crew has truly been on the edge of their seats since the launch, all the way until the landing of the Rover,” says Rodney Babcock, president of Next Intent.

Next Intent manufactured many parts for the Mars Exploration Rover, including the wheels, camera mounts, titanium wheel hubs, and several suspension arms, which are U-shaped channels with complex angles, and undercut walls. These suspension arms were machined from solid titanium, with wall thicknesses as small as 1mm (0.040″). Ultimately, they had to be match-fit together so that they could be electron beam welded. Just the Rover and Lander systems require over thirty gears and motors. Some of these parts help open and unfold the Lander to release the Rover, some deploy scientific and communications instruments, and some are part of the Rover’s mobility and steering system.

The wheels were also a considerable machining challenge because of tight engineering requirements. Wall thickness on the Mars Rover’s wheels had to be tightly controlled on every surface of the part. Dimensions were constantly being pushed to keep the material as thin as possible without affecting the structural integrity designed into the wheel. Maintaining the structural integrity was a top priority. This required constant communication with JPL and a clear understanding of specifications. “It is pretty incredible when you think that a 64-lb piece of material ends up weighing 2.25 lb,” adds Babcock. The geometric complexity of some of the parts reflects the creative design that packs a lot of engineering and scientific capability into a relatively small spacecraft payload.

Next Intent prides itself on working closely with all its customers to determine the best way to approach manufacturing challenges. Their work with JPL on the Mars Rover project has been no different. An integral part of Next Intent’s success is using technology tools that can easily collaborate with one another. The engineering drawings for the Mars Rover wheels were “Limited Dimension Drawings.” Only the key features, datums, and GD&T elements were called out on the paper drawings. Anything not specifically called out in the prints or production specs had to be pulled off the SolidWorks model. Error-free CAD/CAM interoperability was imperative to ensure accurate data was obtained from JPL’s models. “We found SolidWorks and GibbsCAM to be a great combination,” says Babcock. “And bringing SolidWorks files into GibbsCAM is totally seamless. Since GibbsCAM takes in the SolidWorks file in its native format, we don’t lose any data. Once we have it in Gibbs, it is very easy to manipulate the model for machining.”

In addition to the technology, the local GibbsCAM Reseller provides another arm of support for the Next Intent team to leverage the experience of other long-time GibbsCAM users on challenging projects. “Our Reseller was actually able to solve problems and help us do parts that are a real element of our everyday work. Working with our Gibbs Reseller and other veteran GibbsCAM users really helped us to go to another level with the software. We have actually pushed the envelope of what the software is capable of doing on some of these projects,” adds Babcock.

The combination of science and technology will continue to stretch the limits of what can be done, but the real challenge comes when trying to make these ideas a reality– a physical reality. “Cut Part Rendering in GibbsCAM has become a critical tool for working more effectively both on the engineering and manufacturing sides of a project,” says Chris Baker, Next Intent’s manufacturing manager. Within the GibbsCAM software, the Cut Part Rendering feature essentially allows the programmer to run a complete computer simulation of the machining job before sending it to the shop floor for actual machining. Based on the simulation, the programmer can then make modifications to optimize the job or fix problem areas that were not detected initially.

Next Intent takes this information to the next level by creating a series of key screen captures, which become a part of the machining documentation and process control. “We have our programmers review the machining documentation with the setup operators; this ensures everyone is on the same page,” says Baker. And Cut Part Rendering helps Next Intent’s team communicate more effectively with its customers, especially regarding the physical constraints of design.

“Sometimes, we see tooling constraints in a part where the radius or blends are complex. From just viewing the model in SolidWorks, we will think ‘yeah, we can machine that.’ However, once we get into Cut Part Rendering and see the cuts simulated in detail, we discover problems, such as inappropriate tool lengths or tilt angles or any number of issues,” says Babcock. “When our programmers provide these pictures from the actual machining simulation from within GibbsCAM, it helps the design engineers see the part from a machinist’s standpoint, and also exactly where the model is causing difficulty. After our customer sees the problem from our viewpoint, they make the changes to the model-with no bickering! A picture is truly worth a thousand words.” 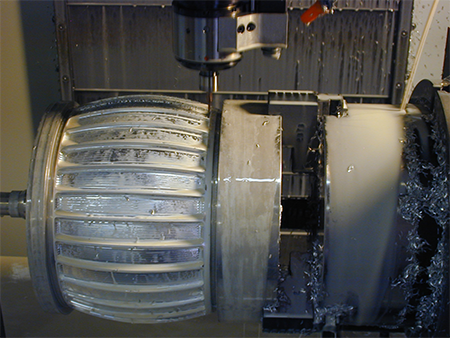 Babcock and the Next Intent team know that, in any earthly endeavor, effectively working together can make a big vision become reality, but technology helps at every turn. “When you really look at it, GibbsCAM essentially helps us communicate more effectively with our customers. Suddenly, they have the same understanding we do; this has saved us untold hours and even days of time,” says Babcock.

Babcock and the Next Intent team know that, in any earthly endeavor, effectively working together can make a big vision become reality, but technology helps at every turn. “When you really look at it, GibbsCAM essentially helps us communicate more effectively with our customers. Suddenly, they have the same understanding we do; this has saved us untold hours and even days of time,” says Babcock.